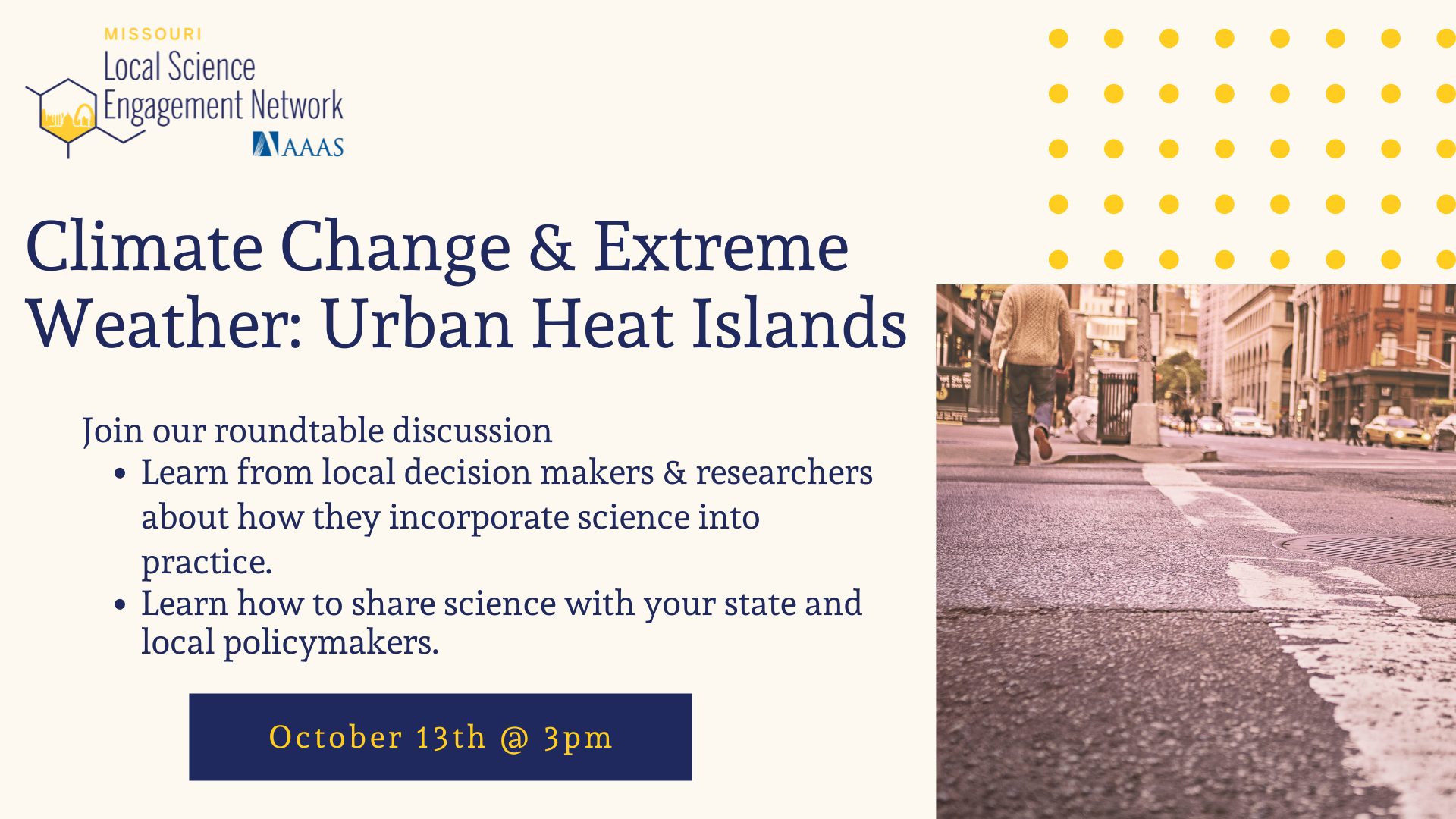 In October, we will bring together researchers and decision makers to discuss Urban Heat Islands - a major health hazard associated with climate change facing Missouri's urban populations. The roundtable discussion will be co-hosted with the Climate Change Program at Washington University.

Due to climate change, Missouri has experienced an increase in average annual temperature and precipitation over the last half-century. These changes have led to heavy precipitation and flooding during the springtime, particularly on the Missouri and Mississippi Rivers and their tributaries. However, shifting rainfall patterns mean that summer droughts are likely to occur more frequently and with greater severity in the coming decades. Forest cover in the state is projected to decrease with rising temperatures. Agricultural production will be impacted by flooding and droughts, but also has the potential to mitigate climate change by promoting soil carbon sequestration. Urban areas are projected to experience increasingly poor air pollution and the impacts of urban heat islands as temperatures rise, leading to harmful effects on human health.

Missouri does not have a statewide climate action plan; however, several municipalities and regions have developed local climate action and adaptation plans. In Kansas City, the Mid-America Regional Council and Climate Action KC are coordinating a carbon emissions inventory and subsequent climate action plan. This region is one of three regions that has joined the Global Covenant of Mayors (with Denver, CO, and Washington, DC). Several cities in St. Louis County have developed climate action plans (e.g., City of Creve Coeur), and the City of St. Louis has implemented several initiatives to combat climate change after completing a baseline inventory of carbon emissions in 2010.

Dr. Fengpeng Sun is an Assistant Professor and climate scientist from Department of Earth and Environmental Sciences at University of Missouri–Kansas City. Dr. Sun obtained his Ph.D. in Earth System Science with a focus on climate dynamics from University of California, Irvine. After his Ph.D., he worked at University of California Los Angles (UCLA) Department of Atmospheric and Oceanic Sciences first as a postdoctoral researcher and then as an Assistant Researcher. Dr. Sun is a climate scientist with particular expertise in developing and implementing high-resolution regional climate modeling framework, and assessing climate variability, climate change and impacts from a regional and local perspective, which is most relevant to human activities.

Brendan Shane is Climate Director for The Trust for Public Land, leading efforts to leverage the power of nature through park creation and land protection to advance climate protection and resilient communities. He previously served as Regional Director for North America for C40 Cities Climate Leadership Group, Chief of Policy and Sustainability for the District of Columbia Government, and Environmental Director for the Anacostia Waterfront Corporation. Brendan is a watershed hydrologist and attorney, with a BA in government from Franklin & Marshall College, MS in geology from the University of Maryland, and JD from the Georgetown University Law Center.

Doug Kluck is the Central Region Climate Services Director for the National Oceanic and Atmospheric Administration (NOAA).  Doug is from Nebraska but has lived in Kansas City since 2000.  He has worked for NOAA since 1992 including the National Weather Service and National Centers for Environmental Information (NCEI).  Doug's region covers 16 states from Colorado to Michigan (north central U.S.).  Doug's responsibilities include collaborating, coordinating and informing on climate service activities among federal, state, tribal, academics and private interests in the region.  Public engagement activities include the interpretation or translation of complex and mutli-faceted climate information, climate monitoring, directing research as well as education and capacity building.  During extreme climate events, such as drought and major flooding, Doug coordinates regional information response, attribution and assessment with core partners like the American Association of State Climatologists (AASC).

Lara Isch is the Sustainability Manager for the City of Kansas City, Missouri.  She has spent the majority of her 20 years in the environmental field promoting the importance of public education and involvement to create meaningful change.  An unapologetic environmental generalist, her career includes experience with consulting firms, government entities, and non-profits in subjects ranging from natural resource management to regulatory compliance.  Her passions include public service, backpacking, rivers, and all things Kansas City.

Lora Iannotti has expertise in maternal and young child nutrition and nutrient deficiencies (zinc, iron, vitamin A, B12, choline, and fatty acids) related to poverty and infectious diseases. She is founder and director of the E3 Nutrition Lab, working to identify economically affordable, environmentally sustainable, and evolutionarily appropriate nutrition solutions globally. Iannotti received her doctorate from the Johns Hopkins University Bloomberg School of Public Health, and a Master of Arts degree in Foreign Affairs from the University of Virginia. Prior to pursuing her PhD, she worked for over ten years with UN agencies and non-governmental organizations on nutrition and food security programming and policy. She serves on public health advisory and journal editorial boards and consults with WHO, International Livestock Research Institute (ILRI), among other international organizations.

Brittany Whitley (PhD) served as the inaugural Education & Workforce Development Policy Fellow at the MOST Policy Initiative and now serves as the Acting Executive Director role at MOST. Brittany earned her PhD in Molecular and Cellular Biology at the University of Washington- Seattle and a BS in Neuroscience from Bucknell University. She also worked for several years as a research fellow at the National Institutes for Health. Although most of her academic training centered around lab-based research, it was her work as Policy Director for the UW Graduate and Professional Senate that inspired her to apply her research training to improve evidence-based policymaking in states.

The event is finished.