Hallie is a doctoral candidate in plant science at University of Missouri. In research supported by the Pioneer Maize Biology Fellowship, she assessed corn’s responses to drought stress in local soils. Hallie has advocated tirelessly for students and scientists in Jefferson City and in Washington, D.C. She served as the Director of Legislative Affairs for the National Association of Graduate-Professional Students, working with Congress on issues like student debt, visas, and health insurance coverage, and training other students from across the country to advocate successfully for themselves. She was also the Early Career Representative to the American Society of Plant Biologists Science Policy Committee, and represented post-doctoral researchers and graduate students at meetings on Capitol Hill. She served as Research Network Coordinator for the National Science Foundation (NSF) funded Plant, Algae, and Microbial Metabolomics Coordination Network and founded the Early Career Ambassadors Program for the International Society of Root Researchers. She is an alumna of the 21st Century Sue Shear Leadership Academy and the University of Missouri’s CAFNR Preparing Tomorrow’s Leaders for Science (PTLS), and has worked in various capacities to mentor, connect, and aid skill-building in other young leaders. 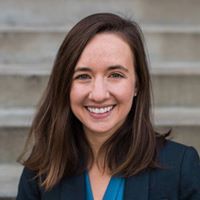