Rep. Kip Kendrick, a Democrat, represents part of the City of Columbia and Boone County in the Missouri House of Representatives. He was elected to his first two-year term in November 2014 and re-elected for a second term in November 2016. Kendrick currently serves as the Minority Whip of the Democrat Caucus.

Kendrick is a Board Member to the Missouri Consolidated Health Care Plan and was appointed to the Missouri Health Facilities Review Committee. Kendrick serves as the ranking Democratic member on the Budget Committee. He serves on the Education Appropriations Subcommittee, Pensions Committee, and Higher Education Committee.

With a long-term history of civic engagement in Columbia, Kendrick comes to the House of Representatives having served as President of Benton-Stephens Neighborhood Association, Chair of the Columbia Neighborhood Leadership Program, a member of the City of Columbia Environment and Energy Commission, and Public Policy Chair for the Association for Persons in Supported Employment for the State of Missouri. Kendrick was named to the Columbia Business Times 20 under 40 class of 2015.

Kendrick’s professional resume includes administrative positions with Job Point as an Employment Advisor, with Boone County Family Resources as Support Coordinator, with Columbia College as an Assistant Director of Admissions, and with the University of Missouri School of Journalism as a Study Abroad Advisor. Kendrick currently works as Special Projects Coordinator for the Office of the General Counsel at Columbia College while he is not in session.

Kendrick, a native of Monroe City, Missouri, is married to Sarah Kendrick. They have a son, Abram Andrew Kendrick. 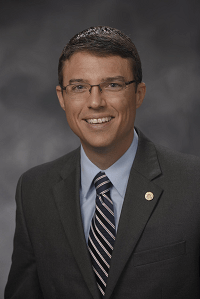